Kanaria NFT Demystified: what am I actually getting?

Update Sept 2021: the birds have hatched. There was a live launch demo, recording can be viewed here: url.rmrk.app/kanariacc. Additionally, you can play with the birds live at kanaria.rmrk.app.

Every bird that hatches will be shown on a card.

These cards will indicate rarity (1), the number and type of gems (2), and the bird itself with all its child NFTs (3). Its inventory (4) will list all owned NFTs - equipped, consumable, and other. 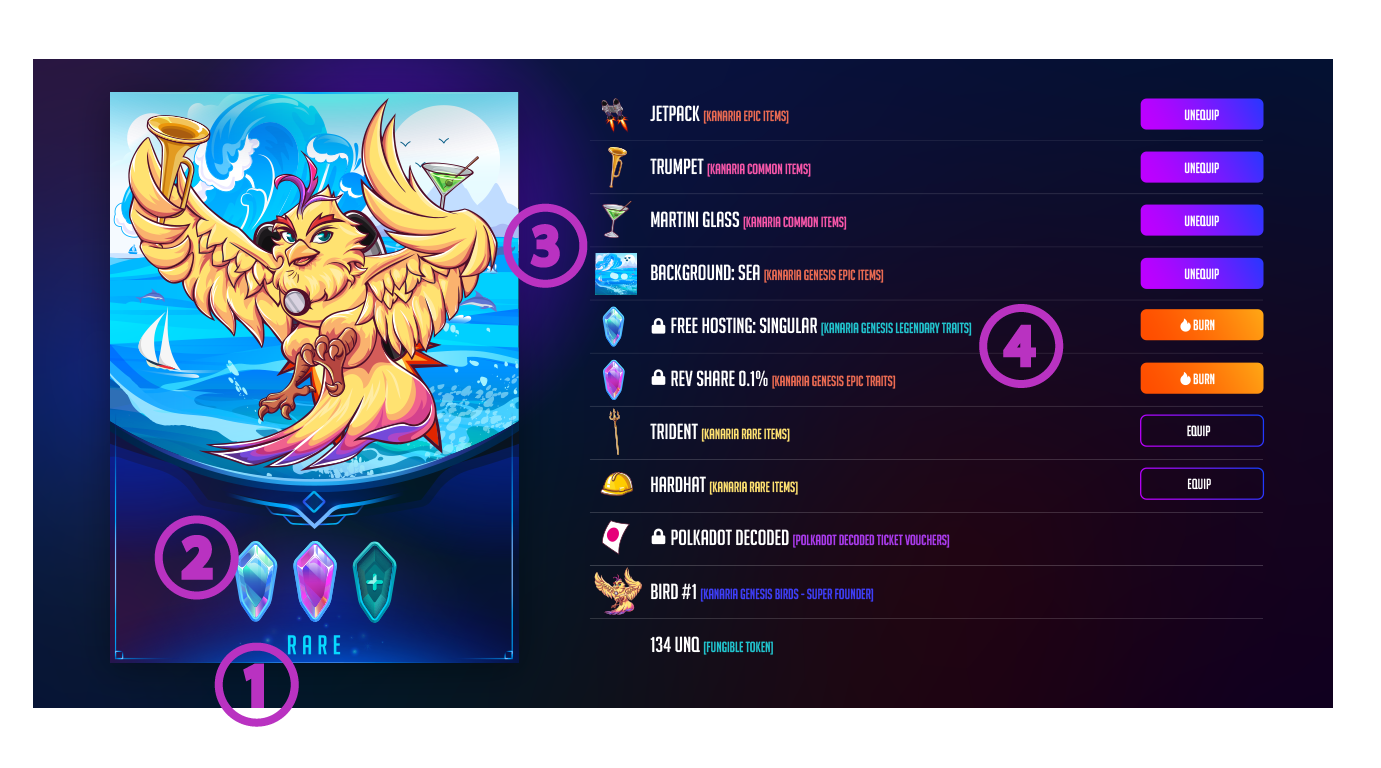 Every bird is composed of 7 sub-elements, all of which have different rarities and chances:

These are rolled randomly, and depending on bird rarity and emotes will differ from bird to bird.

Every bird also has 7 equippable slots:

Each part can equip a specific NFT as an item.

In RMRK, every NFT can own another NFT. So every bird can also contain NFTs in its "inventory" (4):

The inventory will let you hold other NFTs, and equip compatible ones as items. When you choose to equip, you pick the compatible slot into which you can equip it. An equipped NFT may or may not change the appearance of the parent it's being equipped into. See Gems below.

Putting this together, you can roll different birds of different looks and items. This depends on emotes sent to your egg during the egg phase.

Some owned items are not usable on the parent NFT itself, but can still be placed inside, like fungible tokens (1), event tickets (2), or even other parent elements with children of their own (3).

Some items are transferable, others are not. Transferability is defined when an NFT is minted, and will be visible in the UI (4). 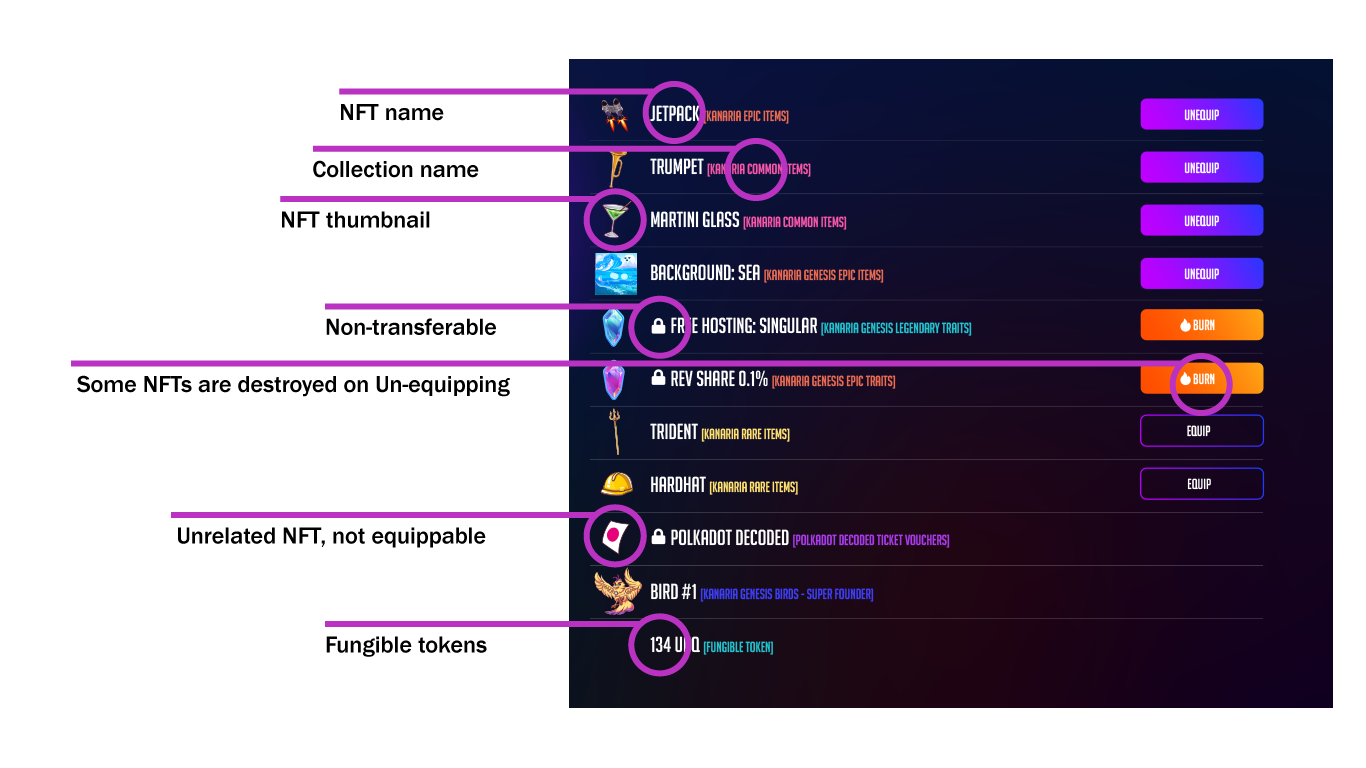 Apart from the 7 parts and 7 slots on every bird, there are also gem slots that can contain special items: gems. The more birds are claimed, the more of these slots are unlocked on all birds of this type. 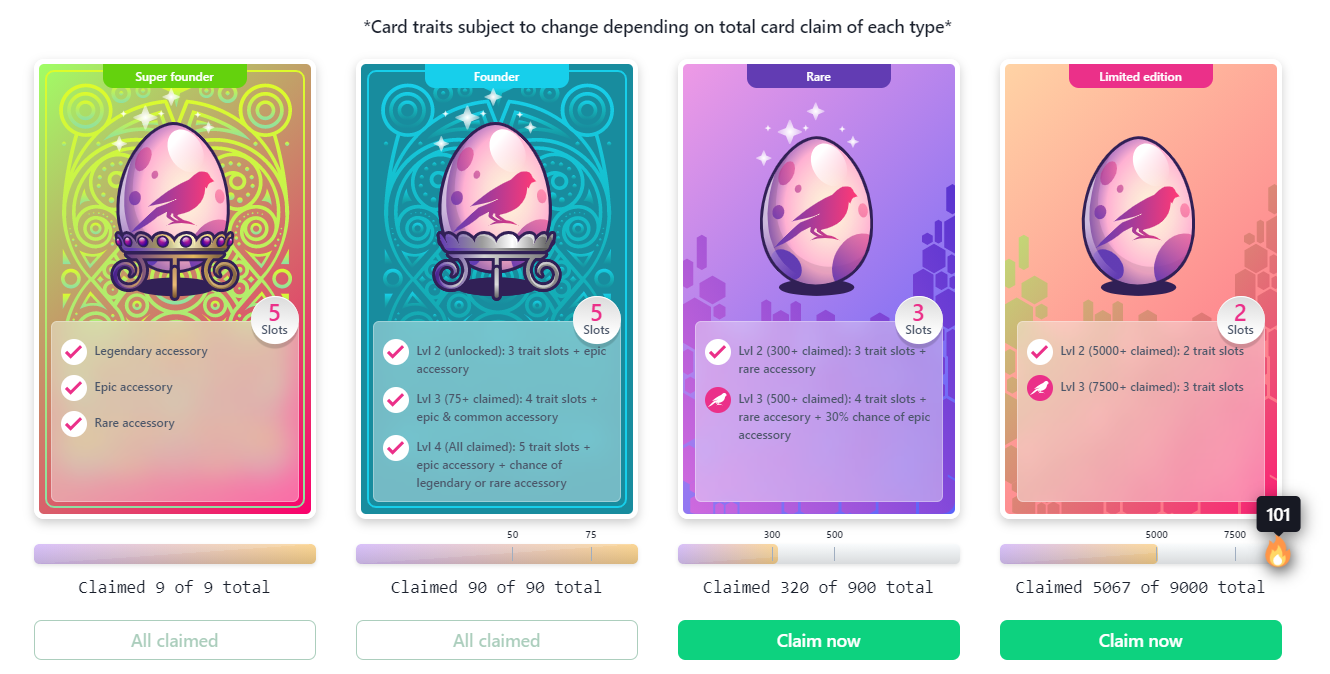 The image above tells us that at 500 claimed Rares we unlock a new gem level.

Crystal color indicates rarity, and hovering over them or clicking / tapping on them reveals information about the bonus they provide.

Gems are different in that most of them burn (disappear forever) once unequipped or used. They are also non-transferable, and can only be minted directly into a bird. They are treated as items in every other sense.

Think of these as powerful bonuses, blessings. Meta-items that don't change the appearance of the bird itself, but have special functionality or bonuses that you can use them for.

The RMRK team will be publishing gem sets well into the future. You will be able to buy these, or burn one of the Crystal "vouchers" to obtain them. These vouchers will be given to ALL the Kanaria bird owners in full capacity of their bird(s) - all your gem sockets will be pre-filled with the vouchers in the following probability:

There will be gems you can only get with genesis vouchers - vouchers given in the Kanaria hatching phase.

Gems are live and explained in full here.

Some Kanaria birds will be multi-resource NFTs. Special, commissioned art will be applied as a secondary resource, and owners will be able to flip a switch to set the primary render (commissioned vs randomly generated).

Here's an example of such art by 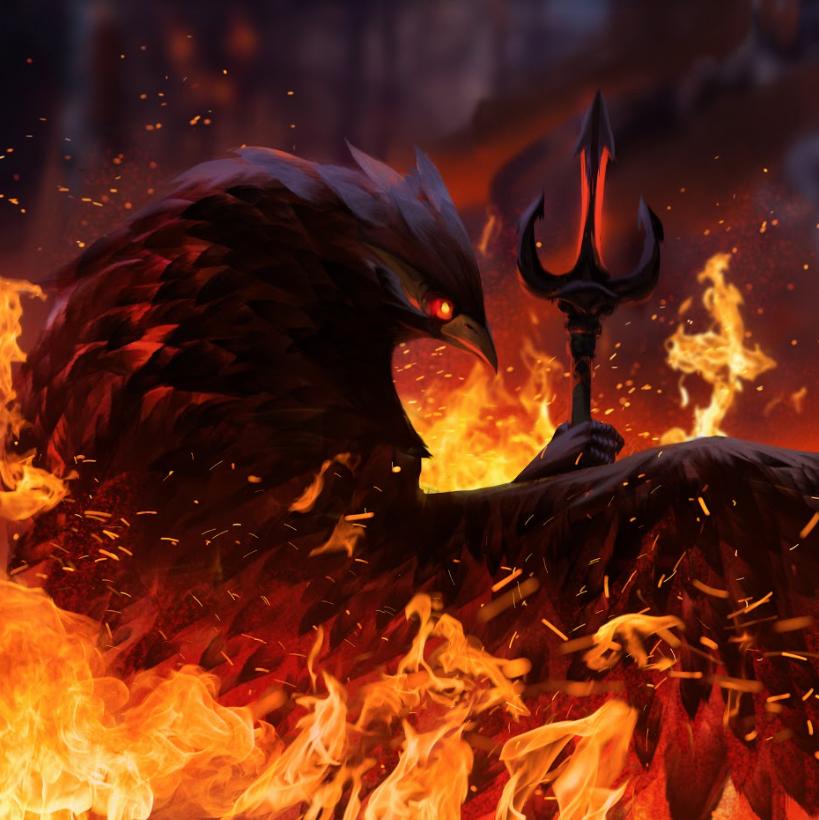 In the future, the RMRK team may mint more items and gems for the birds. These will be compatible with the genesis Kanaria birds, but will never be as powerful as the initial set of perma-buffs.