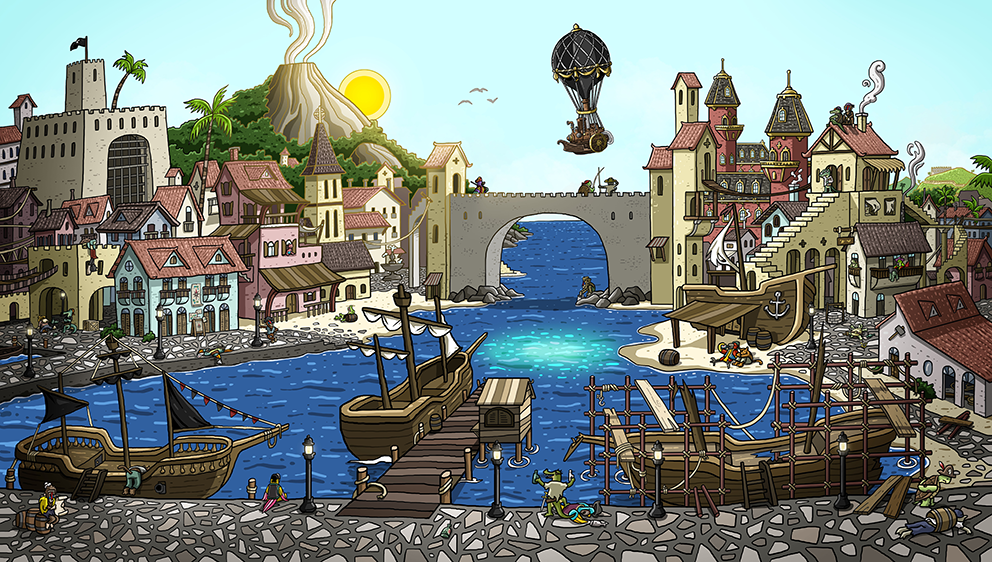 Voyages V1 arrrrrr here! In this post we’ll go into detail about what’s new, how to go on your first voyage and give you a sneak peek at what’s next.

Oh, you’re a lazy pirate and can’t be bothered to read? Here’s the TL;DR of what’s new in this update:

What do you need to go on a voyage? You won’t get far on the high seas without these things.

🦜 A pirate Don’t have one? Buy one on Moonbeans Remember that navigation, strength and luck skills all impact your chance of success on a voyage!

🏴‍ A flagship All pirates will be able to claim one flagship. This flagship will be free to claim. To mint a flagship, go to ‘My Pirates’ on the DPS website and hit the ‘claim flagship’ button. If you buy a pirate who claimed its flagship prior to listing, then you’ll need to buy one on Moonbeans. Flagships are not bound to pirates. They can be sold separately, and any flagship can be used on a voyage with any pirate.

🗺️ Treasure map (TMAPs) TMAPs are exchanged for voyages. Current price is 1 TMAP > 1 Voyage. Pirates generate TMAPs passively. When V1 goes live, TMAPs will be generated at a rate of 1 per pirate per day. Pirates on the secondary market may already come with some TMAPs. Where you see the pirates’ traits, select the ‘TMAPs’ tab to check. To claim your TMAPs, visit the ‘My Rewards’ page of the DPS website to be able to exchange them for voyages.

⛽ MOVR for gas You thought ships only sailed using wind?

How to go on your first voyage

We’re assuming you’ve already got everything you need to go on a voyage. If not, what the hell are you doing here? Scroll back up!

Checking your voyage status Under where your voyages are stored, you’ll see ‘my ongoing voyages’. This is where you can look at your voyages in progress, and how they’re going.

Even if your ship is damaged on the first interaction and can’t sail any further, you will still need to wait for the full ‘time till claim’ timer to expire before you can send your pirate or ship out again.

If ships are ‘DAMAGED’ then they can not progress any further on the voyage, and your ship will need to limp back to port before being repaired and declared sea-worthy again.

You will keep any rewards earned before your ship was damaged. Don’t worry - your flagship can’t be completely destroyed(burned) by the game.

What to do after the voyage?

If you’re a skillful – or lucky – pirate, then your ship may come out of the voyage undamaged. In which case, you’ll be able to immediately go on another voyage.

If your ship is damaged, you’ll need to repair it. Repair it by heading to my Tortuga > my flagships. Alternatively, you can repair the ship directly from the ‘Plan voyage’ screen.

On both screens you’ll find a ‘repair all’ button. Handy for those with an armada of flagships and pirates.

Your success at each interaction type is affected by your pirate’s skill.

🧭 Navigation Navigation skill impacts your Pirate’s ability to sail through hazards without getting damaged. If you fail a navigation interaction, your ship will be damaged. Thunderstorm Ghostly Fog Maelstrom Rough Seas

💪 Strength Strength impacts your Pirate’s ability to come face to face with dangerous enemies and emerge victorious. If you lose a strength interaction, your ship will be damaged. Megalodon Enemy Pirate Royal Fleet Pirate Hunter

🎲 Luck Luck will determine whether you find treasure throughout the voyage. If you lose a luck interaction, you will not earn a chest.
Flotsam Old Cache Buried Chest Shipwreck

Will we have more voyage types? What will be the difference? When V1.5 launches, we’ll have a total of 4 voyage lengths to choose from. Longer voyages will contain more chests. The longer the voyage, the more doubloons a chest contains. But longer voyages will also contain more enemies and navigational hazards, so you’ll need to take a stronger fleet if you want to stand a chance. As the game progresses, we hope to build on the voyage system even more!

Will repairing my flagship always be free? No, repairing will cost doubloons in V1.5.

My 290+ skill pirate just lost an interaction, wtf? The higher your Pirate’s skill, the higher your chance of being successful. But even the most infamous, feared pirates on the seas make mistakes. We’ve capped the max success chance to ensure no voyage is completely risk-free.

What’s in chests? Chests will only contain doubloons to begin with. As the project moves forward, we hope to add additional drops to the loot table including cosmetics, artifacts (helpful in-game items) and other NFTs.

Why can’t I open my chests? You’ll be able to open your voyages and collect your doubloons in V1.5

Wen doubloons? We’re planning to launch V1.5 with a soft target of 4-6 weeks.

What’s the utility of doubloons? They are our in-game currency. You’ll be able to use doubloons to repair and upgrade your flagship and buy support ships. Eventually you’ll be able to buy TMAPs with doubloons, and cosmetics when they are introduced. As the project grows, doubloons will have more and more utility.

Why can’t I buy multiple voyages in one transaction? Due to the way our randomness works, if we made it possible to purchase multiple voyages at the same time it would result in you receiving the same voyage. There’s no limit to how many you can buy, but they must be bought one at a time.