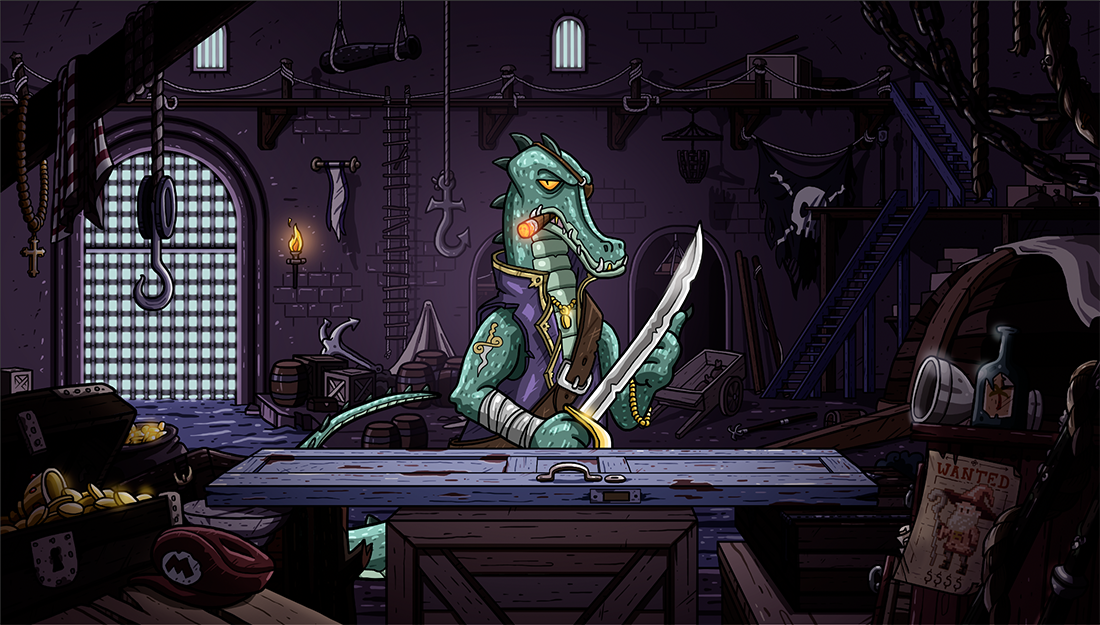 When the markets took a turn for the worst and the dao season ended in a bloodbath, a lot of us felt the impact. It was incredible to see the community remain positive and supportive. Just another reason why the DPS community is up there with the best. Cheers 🍻

We’ve been busy testing, breaking, almost launching and breaking things to get ready for V1.5, our biggest update yet.

What can you expect in this version?

We’ll go into more detail to explain the key aspects of the game that are new, or have been changed significantly:

Chests are the reward you’ll earn for successful luck interactions on voyages. Harder voyages yield higher tier chests. Higher tier chests will contain more doubloons and have a higher chance of dropping artifacts and, in the future, other rare items.

Once you’ve earned your chests, you’ll need to hand them over to the Plunderer’s Guild so they can break the locks and let you get the treasures inside.

Chests have a small chance of dropping other rare items. Right now artifacts are the only other loot we have in the game, but there may be others in future (other collection NFTs, tokens for whitelist spots and so on). Artifacts give you a boost to one skill. Unlike support ships, they cannot be destroyed. While you’re free to use them as many times as you want to, you can only take one on a voyage so you’ll need to choose carefully.

There are multiple tiers of artifact:

Higher tier artifacts have a lower chance to drop. There’s no fixed amount, but the drop rate is low enough that we don’t expect to see the market flooded with legendary artifacts (or any artifact).

You’ll be able to sell these on the secondary market - artifacts are a great way for lower skill pirates or new players to give themselves a boost on harder voyages. The plunderer’s guild will open with V1.5, meaning you can finally open your chests and extract those precious doubloons!

Doubloons will be our primary in-game currency. To start, they’ll be used to repair your flagship, upgrade your flagship and purchase support ships. In the future they may be used to purchase cosmetics, other in-game items, land and more as the DPS universe expands.

With every chest opened by a user an additional 5% will be minted to the dev treasury. These doubloons will be split as follows:

You can buy up to 10 voyages at a time! Yay! They also generate in a much shorter time frame around 1 minute.

To speed up the voyaging process without ruining the experience, we’re allowing up to 3 voyages to be planned and launched simultaneously. Once your voyages are completed, you’ll be able to ‘claim all’.

We’ll also be introducing medium, hard and legendary voyages. These voyages will debuff your skills and contain more interactions. The chests you earn from more difficult voyages will not only contain more doubloons, but have a higher chance of dropping rare loot.

I know what you’re all thinking, “I’m going straight to legendary!” But don’t be so quick to sail out on that legendary voyage! Increased difficulty means that you’ll need to take more support ships and upgrade your flagship to have a chance at completing a successful voyage.

If you set sail on a more difficult voyage underprepared, not only do you risk losing your support ships, or spending more TMAPs on a voyage that’s too hard, you’ll need to wait for your pirates to limp back to port if your flagship is damaged part-way through.

It’ll be interesting to see pirates weighing up risk/reward when it comes to choosing a voyage to go on! Until now you’ve only had to think about which pirate to send on the voyage. With more voyages to spend TMAPs on and artifacts, flagship levels and support ships all contributing to your total ‘fleet skill’, there will be a lot more depth when it comes to allocating your resources to get the most out of your voyages.

In V1.5 you’ll be able to upgrade your flagships. There are 6 upgradeable parts, and each one relates to a specific skill:

Each part starts at level 1, and can be upgraded to a maximum level of 10. Upgrading a part gives a small but permanent boost to the related skill. How you upgrade your flagship will depend on your strategy - do you upgrade everything evenly, or focus on one area to compensate for your pirate’s weaknesses?

This is intended to be the first long-term goal when it comes to player progression so expect to earn enough doubloons to upgrade your ship gradually. There are two stages to buying a support ship, choosing the type and choosing the skill. These are the three types of ships:

Once you’ve chosen a ship type, you’ll choose whether that ship will give you a boost to your strength, navigation or luck skill. You can mix and match different support ships to take on voyages. You’ll get support ships back at the end of the voyage, as long as they weren’t destroyed.

Example; you could take 2 navigation sloops, 1 luck galleon and 1 strength caravel on a legendary voyage.

When you lose a strength or navigation interaction, your fleet takes a hit. If you have a support ship, one will be destroyed at random and any skill boost that ship was providing will be removed, reducing your chance of success for the next interaction of that type.

Example: if a luck galleon is destroyed, your chance of succeeding on the next luck interaction will be lower.

If you don’t have any support ships, your flagship will become damaged and you will limp back to port. You’ll still need to wait for the full length of the voyage before you can send your pirate out again, but you won’t have any more interactions. You will keep any rewards you’ve earned up until that point.

I hope you’re as excited as we are to crack open those chests and set sail with our upgraded flagships in search of rare plunder!

The game in v1 was made easier for a number of reasons, there were no support ships, upgrades or artifacts to boost your skills. If you failed a navigation or strength interaction, it was game over! We increased pirates’ chance of success by around 30% for V1.

Now V1.5 brings lots of new ways to boost your skills and long-term progression in the form of upgrading your flagship, that buff is gone. You’re in dangerous waters now!

We also needed people to earn chests to kickstart the doubloon economy, we estimate between 10-15m Doubloons will enter the market within the first week of v1.5 going live.

With overall higher difficulty, planning voyages will be important to get the maximum doubloon rewards from your voyages. We expect players who put extra thought into the planning process to increase their doubloon yield vs those who don’t.

Rebalancing will be an ongoing process as we collect live data and community feedback.

We need to migrate Pirates to new contracts because of all the changes and features added to v1.5. As old contracts cannot be changed after deployment a whole new Tortuga is required!

In order to migrate pirates to v1.5 we will need to pause voyaging on v1. This will give you a chance to finish your voyages, grab your pirates and Flagships and head over to 1.5. There will be a limit of 60 days to migrate over to v1.5 or we might have some deflationary pirates!

We will be rolling out visual updates, quality of life improvements and other UI/UX fixes as feedback arrives from the community.

When bugs have been squashed and users have migrated we will continue work on v2. Version 2 is all of the functionality of 1.5 but with a complete visual overhaul. You’ll visit the different stores in Tortuga to prepare for voyages, meet the other characters and immerse yourself in the new world we’re building. Good luck out there - Davy Jones